As I planned the “itinerary” for our weekend with the Loftsgaardens, I wanted to include some kid-friendly adventures so Liv & Nash might have something to remember from their travels to Iowa.  Sure, swimming in the pool was a must…but I wanted to get them out and about in Iowa City.  So…while the guys hit up the golf course, Delaney and I took the kids out to the “Cheese Curd Factory”, otherwise known as “Twin County Dairy”, in Kalona, IA.  Growing up, my Dad would take my sister and I out to the local cheese curd factory on Saturday mornings so we could watch the curds be made and leave with a bag of our own to snack on.  I decided every child should have the same opportunity!  LOL

For those of you who live in Iowa and are unfamiliar, check it out.  If you love cheese like I do, it is a must visit.  http://www.twincountydairyinc.com/

Twin County Dairy was built in 1946 by a group of Amish and Mennonite farmers. It was named Twin County Dairy because the 32 members, who formed a co-op, lived in the adjacent counties of Washington and Johnson. They hired Swiss-born John Roetlin, Sr., who had migrated to the United States in 1928. He learned the art of cheese making from his father in Switzerland. Under his direction, the new dairy made its first milk collection and produced its first wheels of Swiss cheese on March 17, 1947. In 1963 they expanded from producing only Swiss cheese to a diversified manufacturer of cheddar, colby, brick and Swiss. Over the years, Twin County Dairy, Inc. has received many awards in cheese judging contests, including second place in the world.

Today, Twin County Dairy, Inc., one of only five cheese factories in Iowa, buys over two million pounds of milk per day to make into cheddar cheese which is sold to Kraft Foods. It is a state-of-the-art facility that meets all state and federal regulations. The cheese factory operates 24 hours a day and has approximately 50 employees. Although some things still need to be done manually, the cheese processing is totally automated.

Located approximately four miles north of Kalona, the “Cheese Haus”, as it is generally known, is the “gateway” into the area’s Amish and Mennonite community. The east-west road that intersects Highway 1 at the Cheese Haus borders numerous Amish farms.

Inside the Cheese Haus there are 3 large windows looking into the cheese curd factory…or what I like to call, “Cheese Curd Heaven.”  There are giant vats of cheese curds stirring and sitting, waiting to be bagged.  It was so fun to see Liv & Nash as they looked into the windows with pure amazement and curiosity like I did when I was young!   Inside, there is also a great little market.  Lots of cheese and goodies to choose from…where do you start?! 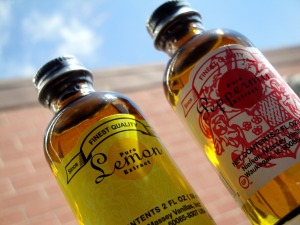 Delaney and I went straight for the “unique” items such as locally made Maple Syrups, Cocoa from Holland and interesting bottles of extracts.  The kids…well they were much more excited about the giant suckers! 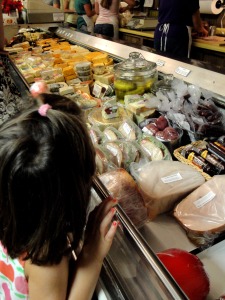 And before leaving, we all headed to the cheese, meat, and pickle cooler. 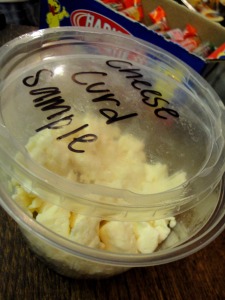 There we sampled a variety of cheeses…smoked, string, wheels, and curds.  Even little Liv tried some curds.  Her first response was, “They are SQUEAKY!!”  Yes they are…that is all part of the fun.  🙂

Whether you are a big kid…or a little kid…trying freshly made cheese curds is a must.  You’ll never took at grocery store curds the same again!

“If I had to give up cheese or chocolate, I’d give up chocolate in a heartbeat.”

I'm Robin and I thank you for visiting!

My name is Robin & I'm encouraging you to indulge in life, in love, and in food. Many of these recipes aren't for calorie-counters, but I believe richness, indulgence, and elegance has its place too. I love my work but in my free time, I also love to cook, host family and friends, travel as often as I can, and then simply relax at home. Through this blog, I hope to share some of my indulgences with you! Enjoy.